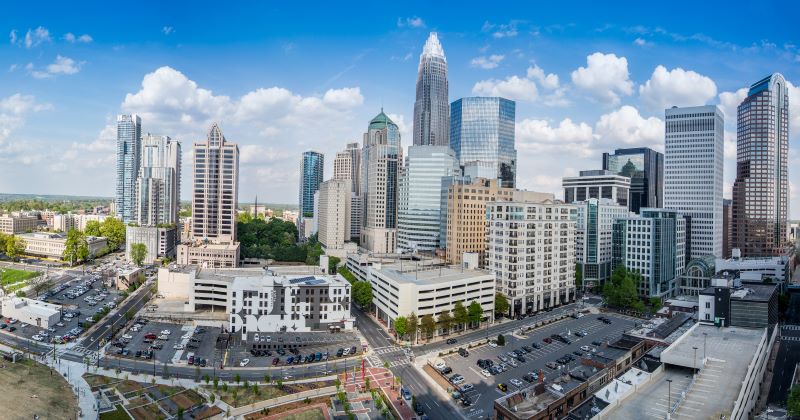 How cool is our city?

Charlotte's got culture, great restaurants, nature, and some of the friendliest people on the planet. And there's always something new to explore! We've lived here for decades but we're constantly learning new things about The Queen City. Here are 18 fun, unusual facts about Charlotte you probably didn't know...

1. James K. Polk, the 11th President of the United States, was born just outside of Pineville and the cabin he grew up in still stands today. He was (at the time) the youngest President ever elected as was responsible for the American territorial expansion to the Pacific coast.

2. Did you know that the proper name for the intersection of Trade and Tryon is "Independence Square?"

3. Over 270 of the Fortune 500 companies are represented in Charlotte.

4. Know why they're (once again) called the Hornets? During the Revolutionary War, General Cornwallis referred to rebellious Charlotte as a "veritable nest of hornets" and the description stuck.

5. There are several churches headquartered in Charlotte including the Advent Christian Church and the Baptist Peace Fellowship of North America. Charlotte is the historical seat of Southern Presbyterianism and has the largest Jewish population in the Carolinas.

6. The Little Sugar Creek Greenway project, a hallmark of Charlotte's commitment to a greener city, was modeled in part after the San Antonio River Walk.

7. Speaking of green, are you aware the city is sometimes referred to as the "City of Trees"? The city government has a long-term goal of creating a 50% canopy for the city by 2050 and they're well on their way to meeting it.

8. Charlotte is the largest metropolitan area in the United States without a zoo.

9. When it's completed around 2020, the outer loop of I-485 around Charlotte will be one of the longest beltways in the country at over 67 miles.

11. With over 240 businesses directly related to the energy industry, the city is sometimes referred to as "Charlotte USA - The New Energy Capital."

12. The Dairy Queen on Wilkinson Boulevard is a designated as a national historic landmark. It's got the only remaining Dairy Queen "Eskimo" roof display left in the entire country.

13. The nation's first gold rush happened in Charlotte. In 1799, miners found a 17-pound gold nugget which sparked a rush of immigrant migration to the city.

14. The Charlotte-Mecklenburg public school system is the 20th largest in the nation and won top honors in the NAEP awards in 2009 for 4th-grade math.

15. CLT is the only major city in the country served by two nuclear power plants.

16. Charlotte has 8 "sister cities" including Krefeld, Germany and Baoding, China.

17. Nearly three-quarters of all motorsports-related industry (workers, companies, drivers, etc.) are located or live within a 3-hour drive of Charlotte.

18. Center City Charlotte was first called "Uptown" way before it was, well, a city. Early residents of the area would walk uphill to get to the crossroads of Trade and Tryon and henceforth say they were going "Up to Town" which was later shorthanded. It is true though that in the mid-1980s the local government officially re-branded Downtown as "Uptown" to make it more attractive as a destination.

There you have it! Hope you learned something new here...we know we did. Charlotte's always got something new to offer and that's one of the things we love most about the Queen City. She keeps us guessing!

Just outside of the thriving metropolis of Charlotte, "main street" still exists. Many of Charlotte's best suburbs are actually best-kept secrets, ...Read More